The Golden Ring of Russia 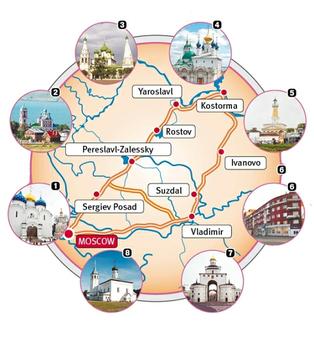 Golden Ring is the main and the most famous Russian tourist route: eight cities, forming a symbolic circle, represent a treasury of Russian culture. While traveling on this magnificent route, you will see the thousand-year history of Orthodox Russia. This includes archaeological sites on the lake Plescheevo, Slavic mounds of IX-XII centuries, temples of XII-XIII centuries - the first stone buildings in Russia: the Church of Boris and Gleb in Kideksha, the Dormition Cathedral in Vladimir, the Cathedral of the Nativity of the Theotokos in Suzdal, the Church of the Intercession of the Holy Virgin on the Nerl River. The monastery architectural ensembles of the Trinity Lavra of St. Sergius, Rostov Kremlin, the Intercession and the Saviour Monastery of St. Euthymius in Suzdal are world-famous.

Travel companies offer a huge number of tours along the Golden Ring - from 1- to 5-day. The longer the tour - the greater the chance to see not only the well-known attractions in the big cities but also remote sights.

The popularity the "event-related" trips to the cities has raised in recent years. These trips are associated with the presence and even participation in various folk festivals, national celebrations and holidays that are regularly held in many cities of the Golden Ring of Russia.

You can check out the aeronautics festival “Golden Ring of Russia” in the ancient Russian cities of Rostov the Great and Pereslavl-Zalessky that is held every year in late July. The sky is painted with bright colors of hot air balloons, slowly flying over forest spaces, ancient monastery walls, reflecting in the water surface of lakes.

In late February-early March, the traditional folk holiday Maslenitsa is celebrated in many cities, its common program include a fair, horse riding, attractions, folk contests, entertainment for children. The traditional food of Maslenitsa is bliny - thin pancakes or crepes, made from butter, eggs and milk.

In Rostov the Great, the annual winter tourist event is a folk festival "Rostov merrymaking - wave of the wand", held in February. The festival includes a show of bell ringing, a parade through the city, theater performances, sports battles, fishing contest, trade fair and folk artists.

In Suzdal museum of wooden architecture annually in July held a Cucumber Festival, popular among tourists. The festival includes theatrical performances for grown-ups and children, tasting of "cucumber menus” food and drinks, fairs, contests, games, hot air ballooning. Many travel agencies organize trips to these and many other national holidays.