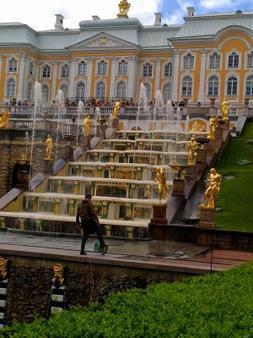 The monument is part of world architecture and Palace and Park art. It includes the Palace and Park ensemble of the XVIII-XIX centuries - the former Imperial residence, thar was made a museum after the Soviet nationalization on May 19, 1918. After the victory over the Swedes at Poltava in 1709, Peter I decided to build a country residence that would rival Versailles in France. The archives contain sketches and drawings with notes of Peter I, on the construction of buildings, schemes of alleys and installation of fountains of Peterhof (translated from Dutch as "Peter yard"). It received its present name, Petrodvorets, in 1944. There are 3 cascades and 144 fountains in Peterhof. In 1714 the foundations of the palace of Monplaisir and the upper chamber where built. First, construction was led by Braunstein, in 1716 he was succeeded by Jean Leblon. Later (1747) Rastrelli rebuilt Upper Chamber, wich resulted in the magnificent Grand Palace. The dome of the Palace is completed by weathervane in the form of an eagle with outstretched wings with orb and scepter in its claws. The eagle has three heads, so when viewed from all directions, it seems double-headed. With the beginning of fashion for landscaping, unlike other summer residences, old parks at Peterhofwas not rebuilt, but new parks were created. In 1779 – 1783, English Park by architect Quarenghsouth was created in the south-west part. From 1826 to 1832 during the construction of the summer residence of Nicholas I “Alexandria” architect Menelaws created a Park, Palace Cottage Farm, Hall and the Ruined Bridge. From 1830 to 1850, on the territory extending south from the Upper Garden, the were built two more park ensembles by architect. Stackenschneider in landscape styles of Colonist and Meadow. Peterhof was severely damaged during World War II: the Upper Garden and Lower Park were mined, many fountains were destroyed, several pavilions were blown up, including Marly Palace, Catherine pavilion of Monplaisir was burned, also Grand Palace was hurt. After the war, most of the buildings and fountains were restored. In Lower Garden is located one of the most beautiful fountain structures in the world – The Grand Cascade that is a logical continuation of the Grand Palace. It has 250 sculptures and decorative elements, 64 fountains spout 140 water jets. This construction used to be called the Big Grotto with cascades. The facade of the Big grotto stretches forty meters wide. Stoneware stages are dug in the hill, and sometimes there is a feeling that the palace stands on the cascade. The height of the water spray is adjusted in such a way that they all rise to the same height, and only the Samson water column is two times higher than others. Created in honour of the 25th anniversary of the Battle of Poltava, Samson Fountain by architect Rastrelli in the center of the Grand Cascade symbolizes the victory of Russia in the Northern War. The victory over Sweden is expressed in others allegorical sculptural groups. For example, Perseus, son of Zeus, holds the severed head of Medusa, that has a portrait resemblance to Charles XII made by the sculptor. Grand Cascade is connected to the sea by Sea Canal, which ends with harbor; in the XVIII century small vessels could moor directly to the palace. Along the canal 12 pairs of fountains hit the four-meter height jets. The defeat of the Swedes at Poltava predetermined the victory of Russia in the Northern War. Key date - June 27, 1709 (old style) is celebrated in the Orthodox Church as the feast of St. Sampson the Hospitable, that won agains a young lion with the help of the Spirit of the Lord. Leo is depicted on the coat of arms of Sweden. The ensemble of the central part of the Lower Park has two symmetrical fountains on both sides of the bucket of Grand Cascade: Italian and French, they were named in honor of countries from which masters gardeners came from. Behind the western Voronikhin colonnades there is a fun fountain called "La Favorite". In a small pool in a circle there are floating figures of four ducks and dogs, that are moved by a hidden mechanism. In the eastern part of the Lower Park is located the Palace Monplaisir (from french Monplaisir - my pleasure; 1714 - 1723) that was built because czar Peter I wished to see St. Petersburg, Kronstadt and the northern shore of the Gulf of Finland out of the window. The palace is designed in a bright stylized Dutch architecture of the XVIII century. Monplaisir housed a czar’s collection of paintings by Dutch and Flemish artists of XVII - beginning of XVIII centuries, that was the first art gallery in Russia. Among the rarities in Monplaisir there is a large collection of Chinese porcelain (150 exhibits). Catherine's pavilion is housing a historical exposition devoted to Russian culture and art of the first quarter of XIX century. In the center of Monplezir garden there is the fountain "Sheaf" that is a largest fountain in this ensemble, its 25 water hit and fall down in larg