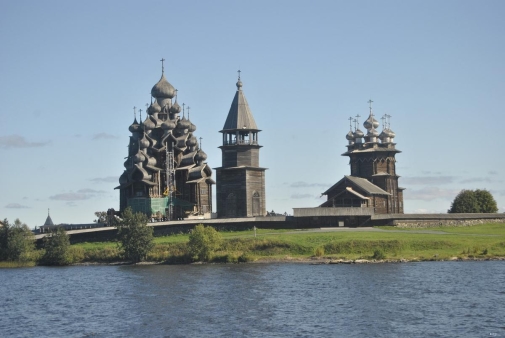 Kizhi is a unique historical-cultural and natural complex of wooden buildings; it is an especially valuable object of cultural heritage of the peoples of Russia and of the UNESCO world cultural and natural heritage. The wooden buildings of the Kizhi ensemble of surpassing beauty and perfection are located in the North-Eastern Russia, on the Kizhi island in Karelian Onega lake. Speaking about ancient architectural attractions, the stone buildings are usually meant. However, Russia has long been famous for wooden architecture. The first Kremlins were wooden, as well as cottages and farm buildings, churches and bell towers. Russian masters were famous for their knowledge to build true masterpieces — and sometimes without a single nail! The main part of the museum collection of the Kizhi is the Kizhi Pogost ensemble. It consists of two churches and bell towers of XVIII-XIX centuries, surrounded by a single fence The settlement Kizhi Pogost of the Saviour was built on the island in the sixteenth century. Over a hundred villages scattered on the Onega Islands gradually merged around this center. In the middle of XVII century a log fortress was built around the Kizhi Pogost to protect from Swedish and Lithuanian raids. In the XVIII century two wooden churches were built on the island, that preserved to our time: Church of the Transfiguration with 20 domes in 1714 and in 50 years – a Church of the Intercession. In the nineteenth century, a wooden belfry was added. The Church perfectly fit into surrounding nature. In 1960 a Museum-reserve of national wooden architecture was founded on the island, the wooden buildings of the surrounding islands were carried here. In the Museum you can see the tiny Church of church of Lazarus of the Murom monastery, situated on the bank of Onega lake that was built at the end of the XIV century and preserved to our days.