The mosque in the name of Ahmad Kadyrov's "Heart of Chechnya" 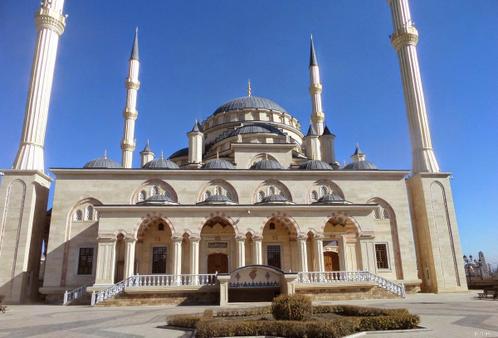 The mosque "Heart of Chechnya" in Grozny is one of the largest, most beautiful and majestic mosques of Europe and the world. It has opened on 17 October 2008 and is named after Akhmad Kadyrov, the first President of the Chechen Republic. The mosque is located on the picturesque banks of the Sunzha river; it is surrounded by a huge Park of 14 acres and is a part of the Islamic complex, which, in addition to mosques, consists of Russian Islamic University, named after Kunta-Haji and the Spiritual Administration of the Chechen Republic Muslims. The mosque was built in the classical Ottoman style. A diameter of the huge dome, covereing the Central hall of the mosque is 15.5 meters; the height is about 23 meters. Minarets are the highest minarets in Russia, their height is 63 meters. Exterior and interior walls of the mosque are faced with travertine marble, and the interior is decorated with white marble. 36 chandeliers installed in the mosque, resemble the three main shrines of Islam with their shapes: 27 chandeliers imitate the mosque Qubbat as Sahra in Jerusalem, 8 pattern mosque Rosato-Nabawi in Medina and the biggest, eight chandelier, repeats forms of Shrine of the Kaaba in Mecca. Creation of this collection of exclusive chandeliers demanded several tons of bronze, about three kilograms of gold, and more than one million parts and crystals of Swarovski. The area of the mosque is 5000 square meters and a capacity is more than 10 thousand people. The same amount of believers can pray in adjacent summer gallery and square. A huge Park, spread around the mosque, has over fifty varieties of trees, and with its cascade of colored fountains and night lighting, charms with its beauty.