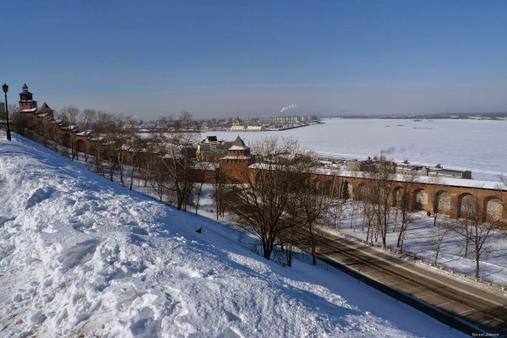 It is known from the annals, that Nizhny Novgorod was founded in 1221 by Grand Vladimir Prince Yuri Vsevolodovich. Fortifications of the city - deep moats and high walls - were originally built of wood and earth. Stone fortifications of Nizhny Novgorod Kremlin appeared a century and a half later, after the Moscow Kremlin, in 1515, when it became necessary to strengthen the defense of the city - the main stronghold of the Moscow State against the Khanate of Kazan. The new Kremlin was surrounded by a two-kilometer long wall with 13 towers. In the XVI century the fortress was repeatedly precipitated by the enemy, but the enemy never was able to seize it. With the fall of the Khanate of Kazan, Nizhny Novgorod Kremlin lost its military significance and began to play the role of the administrative center. After an unsuccessful repair in the late eighteenth century the masonry of the Kremlin walls began to crumble. Restoration works were carried out by the Soviet government in the mid-twentieth century. Nizhny Novgorod Kremlin might be interesting, especially as a historical monument, the core of the Nizhny Novgorod land.