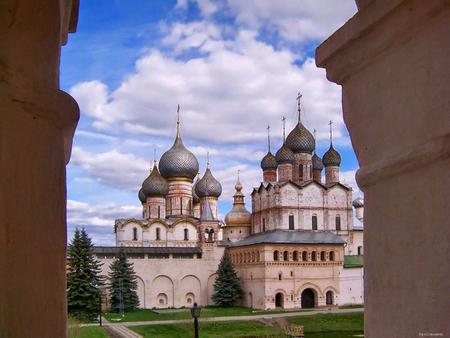 The Kremlin was built in the XVII century as Rostov residence for Metropolitan Jonah. Therefore, it cannot formally be called “the Kremlin”, its stone walls were rather decorative in nature and were not purposed to defend the city. The Kremlin has eleven towers (five on corners, four on gates and two sentinel towers). There are several cathedrals inside, the most outstanding among them is the Assumption Cathedral having bell tower with four tops. At the end of the XVIII century, after the transfer of the metropolitan residence to the Yaroslavl Kremlin deteriorated, it was even proposed to demolish it. But the inhabitants of the city had its own Kremlin defended, and now it is one of the most famous tourist sites of the Yaroslavl region.