The Trinity Lavra of St. Sergius 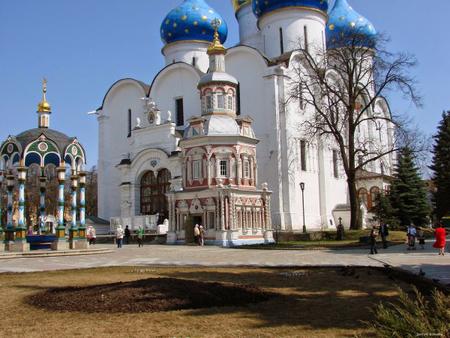 The Trinity Lavra of St. Sergius is located in the centre of the city Sergiev Posad, Moscow region, on the Konchura river. It was founded in 1337 by St. Sergius of Radonezh. The earliest monastery building is the white stone Trinity Cathedral, built in 1422 in the place of the wooden church. It is built by Serbian monks from Kosovo, who found refuge here after the Battle of Kosovo. This is a unique historic site, one of the few cathedrals, where is preserved iconostasis painted by the great masters of icon-painting, Andrei Rublev and Daniel Chorny. Trinity Cathedral keeps the relics of St. Sergius of Radonezh, and hundreds of parishioners come to worship every day there. Cathedral immortalize traditions of the Moscow architecture of XIV-XV centuries. Over time the architectural ensemble has formed around the temple. In 1744 the The Trinity monastery of St. Sergius was awarded the honorary title of Lavra. Today this is a functioning monastery, the spiritual center of the Orthodox Russia. The monastic complex consists of 45 buildings and monuments. There are about 300 priests on its territory. Saint Gate with the gate church of St. John the Baptist is the main gate of the monastery. The biggest building behind them is the Dormition of the Mother of God Cathedral. Small tent that adjoins the Cathedral from the north-west is the Tomb of the Godunovs. It keeps the remains of Tsar Boris, his wife Mary, son Theodore and daughter Xenia. Beginning from the XVII century, russian metropolitans were also buried here. A lot of treasure is kept in the monastery sacristy, among them there is a unique decorative and applied arts, gifts that kings and wealthy people have made to the monastery. The Lavra gathered a unique library of manuscripts and books for centuries. From 1814 a Moscow Theological Academy resides on the territory of the Trinity Lavra of St. Sergius, it is the oldest higher educational institution in Russia, founded in 1685 in Moscow. Since 1940 the Trinity Lavra of St. Sergius is the state Museum-Reserve and it is under UNESCO protection.