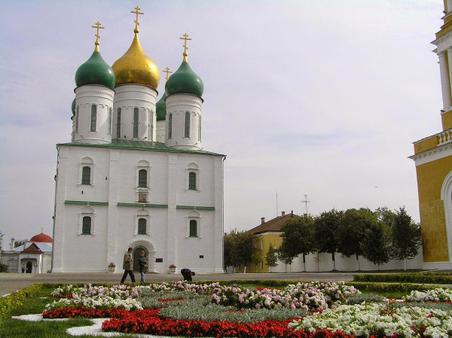 The Kolomna Kremlin is one of the most powerful fortresses of Muscovy. It was built in 1525-1531 during the reign of Vasily III. The Kremlin is located at the confluence of the Moscow-river and Kolomenki-river. According to some sources, Italian architects who also participated in the construction of the walls and towers of the Moscow Kremlin supervised its construction. Unfortunately, the Kolomna Kremlin do not retain a lot of original features, only a few towers and a couple of fragments of walls remain. However, in modern time, it still amuses with its grandeur and power. The most interesting tower of the retained seven - is Marinka (Kolomna) tower. This is the highest outpost of city Kremlin. Its height is 31 meters. Marinka tower consists of eight floors, and its facade is divided into twenty small faces, so if you look at the tower from a distance, it seems to be completely rounded. This tower is associated with a legend: it is said that a wife of the False Dmitriy, Marina Mnishek was kept in it. Behind the fortress wall there is a Cathedral square, in this square is located The Assumption Cathedral of the XIV century - the main temple of the Kolomna Kremlin. Next to Cathedral stands the belfry, built in XVII century. It is considered the loudest belfry with tented roof in Russia. There are two churches near the bell tower: Church of the Resurrection, where Dmitry Donskoy married Princess Eudoxia in 1366, and Tikhvin Church. Resurrection Church is one of the oldest buildings of the Kremlin. At the present time there is a military historical sports and cultural complex on the territory of the Kremlin. Jousting and other games of medieval knights take place here, including tournaments of fighters, wrestlers and shooters, ancient rituals, festivals, fairs. An exhibition of ancient weapons and military equipment works in the Kremlin, there are also thematic exhibitions, military games and attractions. Here you can hold a sword in your hand, as well as try on armor, and shoot an arrow from a drawn bow or ancient crossbow to a target.